Skip to Main Content
It looks like you're using Internet Explorer 11 or older. This website works best with modern browsers such as the latest versions of Chrome, Firefox, Safari, and Edge. If you continue with this browser, you may see unexpected results.
LIBRARY RESOURCE CENTER
HOME DATABASES CATALOG GUIDES

When I look straight forward I can see that I’m flying. I have a dramatic pair of bat wings but they don’t help me fly; they just look neat. When I focus on what I can hear, though, it is a radio and it is broadcasting a debate about whether David Beckham should change his mind about moving to the United States of America to play football. If I listen really carefully, I can hear the fan of my computer and a cat breathing as it sleeps. In front of me, to my right and left are shelves of books, a digital camera, mp3 player and a cup of coffee. There’s a newspaper on the table to my left and, somewhere outside, it sounds as if a group of students are discussing Big Brother. This is my world and it’s probably not that dissimilar to yours, gentle reader — if “reader” is an appropriate term for who you are.

We live in a world of multiple literacies, multiple media and multiple demands on our attention. Each of these is complete in itself yet we do not experience them individually, we synthesize and mold them to our needs. Each of us, every day, is involved in staggering acts of comprehension and production. It’s only a few thousand years since we sat around fires, telling stories to hold back the night using nothing more than sound and gesture. What we do now may draw on technologies that could not have been predicted even a few generations ago yet, we argue, what we do now is not fundamentally different from what we did then. In this article, we explore a new concept — “transliteracy” — which is both very old and brand new and may help us shed light on how we, as human beings, communicate. To do so we are going to tear literacy away from its original association with the medium of written text and apply it as a term that can refer to any kind of medium. And then we’re going to go across and beyond literacy to transliteracy.

Transliteracy is the ability to read, write and interact across a range of platforms, tools and media from signing and orality through handwriting, print, TV, radio and film, to digital social networks.

As a behavior, it is not new — indeed it reaches back to the very beginning of culture — but it has only been identified as a working concept since the Internet allowed humans to communicate in ways which seem to be entirely novel. As a notion, it grew to fruition during discussions among the Production and Research in Transliteracy (PART) Group at the Institute of Creative Technologies (IOCT), De Montfort University. It is a good example of open source thinking between diverse collaborators, and in this article we offer up the idea of transliteracy for further development.

The word ‘transliteracy’ is derived from the verb ‘to transliterate’, meaning to write or print a letter or word using the closest corresponding letters of a different alphabet or language. This of course is nothing new, but transliteracy extends the act of transliteration and applies it to the increasingly wide range of communication platforms and tools at our disposal. From early signing and orality through handwriting, print, TV and film to networked digital media, the concept of transliteracy calls for a change of perspective away from the battles over print versus digital, and a move instead towards a unifying ecology not just of media, but of all literacies relevant to reading, writing, interaction and culture, both past and present. It is, we hope, an opportunity to cross some very obstructive divides. 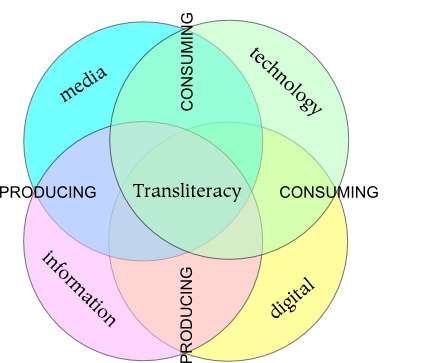